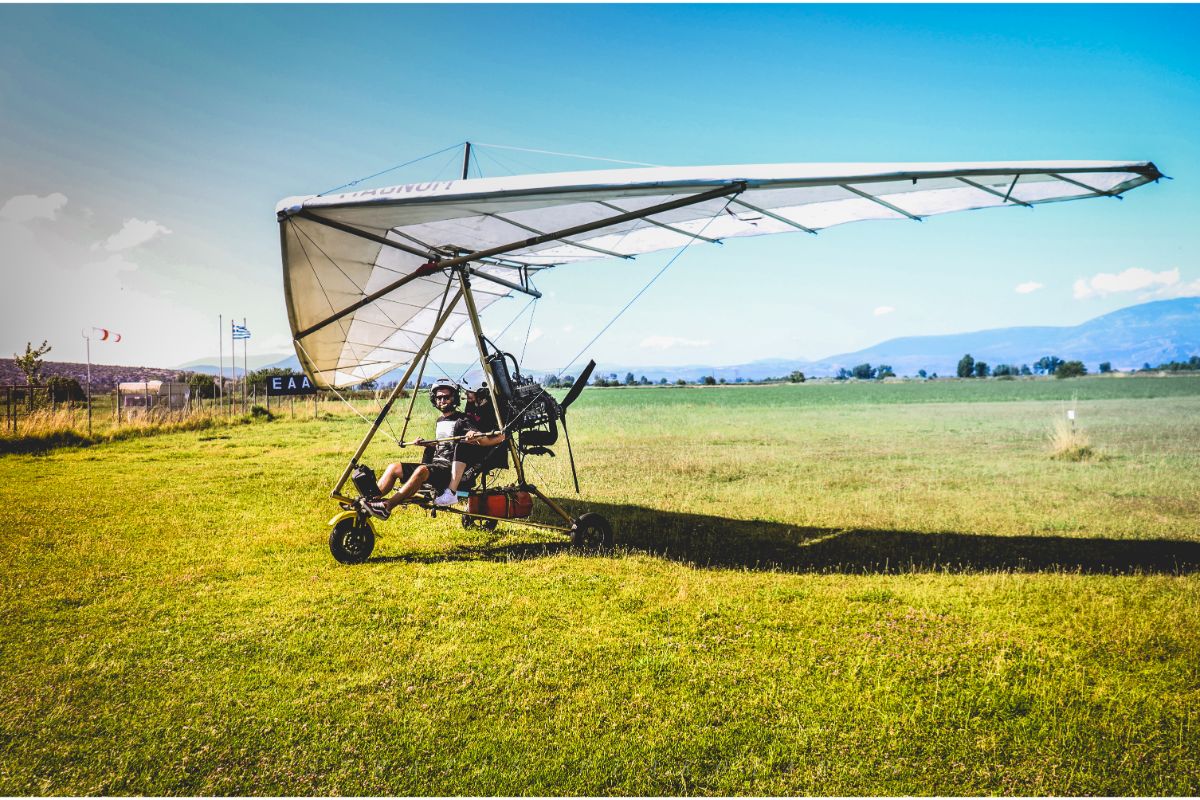 The activity of Paratrike and Paramotor

Trike is an activity for both adults and children. It offers the possibility to take in a different view of the airspace. You can also experience the unique feeling of freedom that it offers you, as the vehicle is open all around. Enjoy the bird’s-eye view from above and take unique photos and videos at the same time. More information about the activity, the vehicle and the venue can be found in our article below.

General Information about the Trike

The Trike or motorized eagle is a detachable small and light aircraft. The general name of the respective aircraft is Ultra-Light Aircraft, due to their light weight. The name comes from the corresponding English word tricycle. This is because these aircraft are usually based on 3 wheels. As for our country, the Trike is a sport under the auspices of the Hellenic Air Sports Federation.

The dominant parts that make up the aircraft are 3. The wings or the wing, the frame and the stroller in which the people sit and support the engine and finally the engine itself that gives the corresponding impetus for the take-off of the aircraft. These aircraft need less than 30 meters of space to take off, while only 60 for their respective landing. Flights are available all year round. Finally, compared to similar activities, such as paragliding, the Trike can fly longer thanks to its engine, without depending on hot air currents.

You can watch a video of our “flights” from the castle of Voitia below:

The sport of Trike is a modern sport and the first construction of a corresponding light aircraft does not date much earlier. The first aircraft began to appear only in the early 1970s. The first experimental constructions were made a little earlier in 1948 with Francis Rogallo as a pioneer in construction. However, the performance of the first aircraft was obviously not the best possible, nor could they cope with conditions that in today’s data would be considered perfect. More specifically, Trike’s history dates back to the invention of Francis Rogallo’s wing and the subsequent evolution of the innovations of the Paresev engineering team and others.

In 1948, engineer Francis Rogallo invented a self-expanding wing which he patented on March 20, 1951, as the Flexible Wing. In 1973, two brothers from California, USA, Bob and Chris Wills founded “Wills Wing”. It was one of the first companies to mass-produce motorized eagles. In addition, they were the ones who paved the way for the sport of hang gliding. In Greece in 1976, an adventure film was made, called “Sky Riders” in which extensive use was made of motorized eagles. In 1985 the Hellenic Paragliding Federation was founded.

As in all sports, regardless of location, in Trike training there is a necessary and important stage that must be preceded before one engages in this activity. Training is divided into two parts, theoretical and practical.

The theoretical part consists of 10 hours of theory and includes various courses such as: meteorology, civil aviation law, flight technique and R / T radio (including a limited radiotelephony diploma required for aircraft flights).

Respectively, the part of the practical training consists of 15 hours of lessons. 5 hours of them must be solo. The first solo flight is allowed, if 30% of the foreseen hours of theoretical teaching have been completed and 7 hours of flight have been successfully completed in the presence of a certified instructor.

At the same time, some conditions must be met in the field of health. The person concerned must be in good physical condition so that s/he can operate the Trike both during the flight and on the ground. Various diseases such as epilepsy, diabetes, and heart problems can not coexist with any air exercise. Respectively other phenomena such as pregnancy, neurological disorders or bone diseases and dislocations should be made known to the staff before the start of the training courses.

The cost of the training for a Ws-Trike diploma, (ultralight boat) amounts to 1800 €.

There are 3 Trike categories that we will see below:

The cost of a simple aerial flight lasting 15 minutes, starts from € 25 per person. You do not need any knowledge or specific equipment to participate in Trike activity. During the flight you are allowed to have an action camera with you to record this unique experience. There is no age restriction as long as minors have the consent of their parents. The place where the flights of the aircraft take place every weekend is the E.A.A. (Hellenic Sports Air Force) in the castle of Viotia.