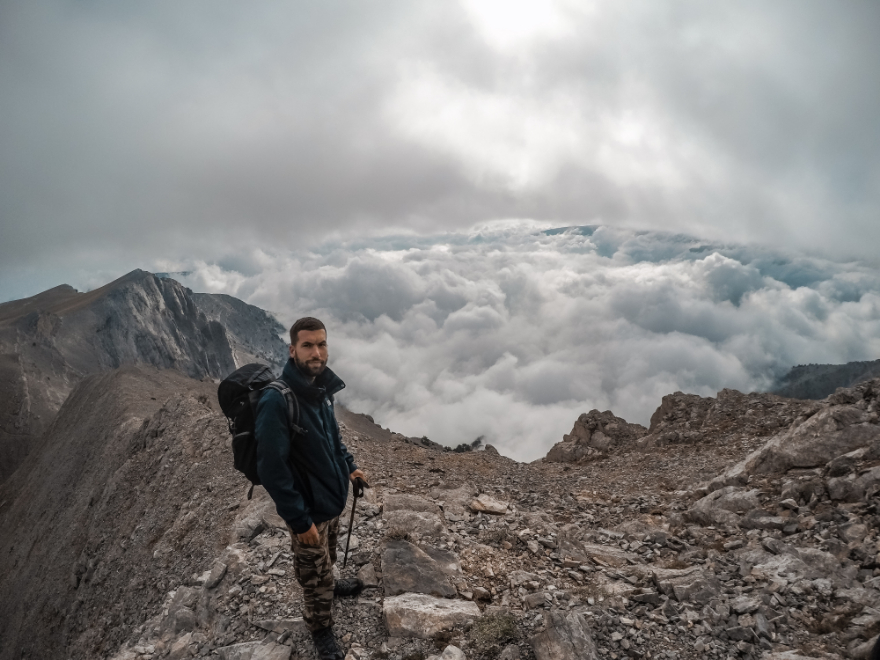 If you love hiking and outdoor activities, you cannot miss the chance to climb the imposing mountain of the Greek gods. Mount Olympus owns the highest peak in Greece, Mytikas, which is located at an altitude of 2.918m. You will find all the necessary information you need for your first ascent to Olympus in the article below.

The world-renowned mountain has been strongly associated with Greek mythology, since, according to legendary and ancient historical reports, the gods of Olympus used to live there. According  to studies, people in the Iron Age settled at the foot of the mountain. These first inhabitants were impressed by the charm of nature, its high peaks and the low clouds that caused frequent storms. That is how the first legends started to spread by people. Later on generations created the well-known Dodecatheon of the Ancient Greeks.

According to mythology, the twelve gods lived in the gorges of Olympus, where their palaces were located too. The Pantheon (today’s Mytikas) was their meeting point, whereas Zeus’s throne was located at the peak of the mountain with the current name ‘’Stefani’’. It is also reported that the nine muses, protectors of Fine Arts and Zeus’s daughters used to live on the eastern side of Olympus.

However, ancient Greeks did not make an attempt to climb to Olympus and particularly the peaks ‘’Pantheon’’ and ‘’Zeus’s throne’ ’(Mytikas and Stefani respectively. They only reached the nearest peak which is now called Agios Antonios, from where they had visual contact with the peak. This is where they would also leave their presents to gods, as relatively recent archeological findings show.

A typical starting point is Litochori, which is located at the eastern foot of the mountain. However, one can follow different paths on their way to the top. On our first day of the ascent, our final destination being Giosos Apostolidis shelter, we went through the route of GORTSIA – PETROSTROUGA –MUSES’ PLATEAU.

While heading towards Litochori you will come across an uphill narrow road at the 14th kilometer on your right, which ends in a parking lot at Gortsia. This is where our bus left us to start the ascent to Olympus, too. At this point of the hiking route the famous mules are at the climbers’ disposal. Should someone need them to carry his/her equipment to the shelter, paying some extra money. This solution is offered to anyone who does not want to carry extra weight and just wants to relax and enjoy the route.

Almost 2/3 of the route take place in a forest with tall trees. The rest of the way towards the plateau of the Muses takes place in an alpine landscape with low vegetation. Make sure you have enough water supplies before departure. Along the way there are some fountains at ‘’Strangos’’ and at the beech forest but you have to deviate a little from your path to reach it. Even though the trails are marked, it is always preferable to have company since the dangers of the mountain are countless.

The first characteristic spot of our route was the passage through ‘’Barba’’(1450m). It ended up at the first station at the ‘’Petrostroungas’’ shelter (1940m), by following the main path of the route. Personally, it took us about 3 hours to get there. This obviously depends on the dynamics of the team and in how fit you are. We continued moving upwards, reaching the alpine peak of “Skourta” (2450m), climbing with ropes to the passage of “Giosos” which is the gate of a narrow ridge called “Neck” that ends at the “Plateau of the Muses”. At the beginning of the plateau the path is divided into two parts. The left part leads to the shelter of “Christos Kakkalos”. The right ends at our destination, the shelter of “Giosos Apostolidis” which is built in the saddle that descends from the top of Profitis Ilias.

When we climbed the plateau and on our way to the shelter the fog was so dense. There was literally no visibility, not even at 20m. As a result, we got separated from the rest of the team, but we got lucky since we came across the people with the mules who guided us. Be careful in such cases, mind the weather conditions and where you step and mind the ravines and narrow passages as well. You never know what dangers the mountain hides.

We slept at the shelter for one night, in order to depart for the summit the next day. We really enjoyed the lunch, dinner, and several beverages too at the shelter’s big dining table. At night, the lights turn off so it would be useful to have a power bank for your mobile phone or a small flashlight in case you need to visit the bathroom which is outside the shelter.

The next morning we departed for Mytikas, which is the mountain’s highest peak, by climbing from Louki. To climb, you need helmets, as rocks may fall on your head from other people who climb above you. You better not try to climb Louki on a rainy or foggy day due to the slippery rocks. It takes about 40-50 minutes to climb it.

What comes next is passing under Mytikas and Zonaria and stopping for some rest at ‘’Spilios Agapitos’’ refuge (2.100m). After resting and eating for half an hour, we continued the descent to get through Enipeas springs and end in Prionia (1.100m).

Video from our ascent to Olympus you can watch below:

Every mountain, as much as every climber, has its own peculiarities. I will mention an indicative set of equipment below, which I personally consider a requisite. My team and I climbed the mountain in September and while it was hot at the beginning, the temperature reached -3 degree Celsius at the refuge. So, the only sure thing is that you should never underestimate the mountain.

You better take with you your own sleeping bag whether you dare to sleep in a tent or in the refuge with all the other people. If you are indoors but you are still cold, wear all your clothes in the right order. If you sleep outside, it would be helpful to have a sleeping pad for a more even bed.

As for the tent, if it is not provided and you have to take your own, prefer a small one in order to be lighter when carrying it during the ascent. Make sure it is waterproof too, since on the mountain anything is possible.

Place most of the weight in the middle of the backpack in order to be more easy to carry. Place the less useful things at the bottom of the bag and the things you are going to need during the ascent at the top. What is more, in the outer pockets of the bag you can have a bottle of water, a snack or some nuts so that you can find them anytime.

It would be useful to have easy access to the content of your bag since the mountain’s low temperature doesn’t contribute to great mobility. In addition to all the above, bring along  an extra night torch. Αlso you’ll nees a camera. (I suggest a small action camera for less weight and volume). And a power bank fit in a typical 45-50 lt backpack. Otherwise, someone may choose to leave equipment with the mules and take only the most necessary things for the ascent.

Last but not least is the economic factor of such an activity. There are several hiking groups, which undertake both the transport and the ascent to Olympus. Εither to one of the shelters or to the mountain tops. Apparently, another important part is the starting point of the trip. We came all the way from Athens and the total cost was about 55€ (transfer, climb, accommodation). Plus our personal costs at the shelter for food and drinks.