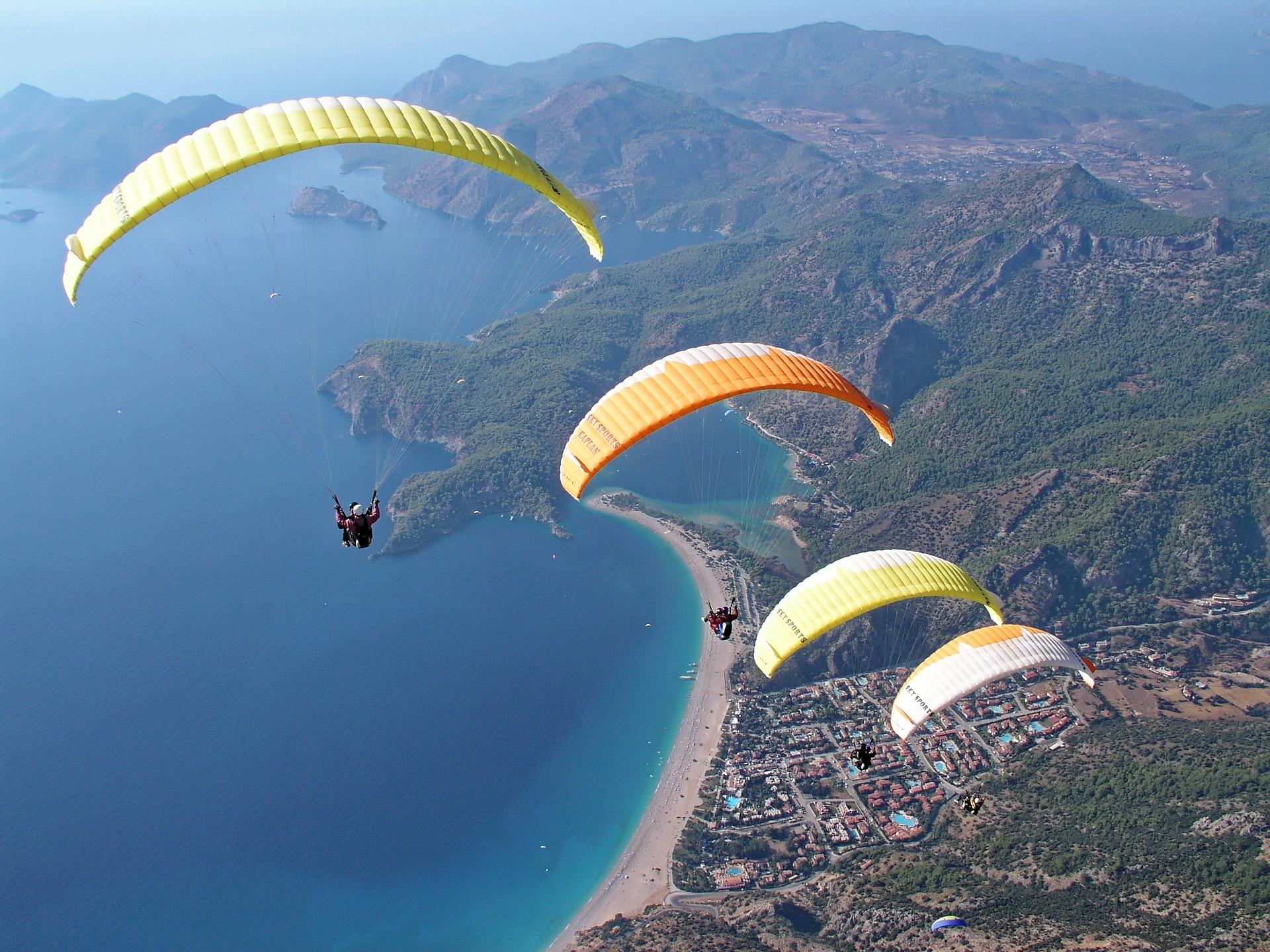 Paragliding or parapente is an aerial activity that can be either a leisurely walk in the air, or a more extreme experience with various maneuvers and turns. Mixed emotions, great views and escape from the routine are some of the things you will experience. Below in our article we will mention in detail all the necessary information for this activity.

Known by various names such as: slope parachute that we mentioned in the introduction, paragliding or parapente. The last name Parapente comes from the French compound name (para) from parachute meaning parachute and (pente) meaning slope. It is the newest and simplest form of individual sailing. It is the flight using a special parachute and an aircraft-shaped device.

The take-off is from a high slope with the operator running and jumping from it. By exploiting the upward currents, the parachute is operated and the corresponding course is deleted. As it is not a flying device, the paraglider only goes forward and obviously gradually loses height. How many meters of height it loses varies depending on the category, construction, weather conditions and experience of the operator. It is designed to take advantage of currents in order to stay in the air as much as possible. This way the flight can last from a few minutes to several hours. It depends on the circumstances, the maneuvers attempted and the mood.

In 1963, Canadian Domina Jalbert received a patent for a wing with multiple cells in the parachute that filled with air while the rear end was closed. The wing had a flexible dome. This was the top and with a number of extending ribs they essentially formed a wing corresponding to an airplane wing spoiler. Depending on which cells were closed, the course changed or slowed down.

After Domina, David Barish developed the single-surface wing to retrieve NASA space capsules. After testing in Hunter Mountain, New York, in September 1965, he promoted jumpering as a summer activity for ski resorts.

More information on free fall can be found in our article here.

Author Walter Neumark wrote the Operating Procedures for the parachute’s ascending course through hot currents. In 1973 he and a group of others with a passion for the sport left the British Parachuting Association to form the Parascending Clubs. In 1997, Neumark won the Royal Aero Club Gold Medal in the United Kingdom. Authors Patrick Gilligan and Bertrand Dubuis wrote the first flight manual, the Paragliding Manual, in 1985, coining the word paragliding.

All the above improvements and developments were combined in June 1978 by three friends, Jean-Claude Bétemps, André Bohn and Gérard Bosson, from France. Inspired by an article, they calculated that on a suitable slope, a “square” sea parachute could swell after jumping off the slope. Bétemps started from the Pointe du Pertuiset and flew 100 meters, while Bohn followed him and fell on a football field 1000 meters below. This is how the term “Parapente” was born.

Europe has seen the greatest growth in paragliding. In France alone, more than 25,000 active pilots were registered in 2011.

Paragliding is an exciting and unforgettable experience. It is something special that makes you escape from the problems of everyday life. Anyone who wants to make a two-seater flight does not need to have any previous experience or skills. Everything before, during and after the end of the activity is taken care of by the certified operator. More specifically, in addition to the will for the flight, the paraglider is addressed to people from 16 years old upwards with the presence of a guardian who will allow it. Respectively men and women from 18 to 60 participate normally. The only condition is that their body weight does not exceed 110 kg.

You can watch videos from our flight below:

The training of young pilots consists of the theoretical, but also the practical part that we will analyze below.

The duration of the courses is about 4 hours. These include meteorology, aerodynamics and flight engineering. Reference is also made to all air traffic rules, to emergencies that may arise, as well as how to deal with them in each case. Finally, the sequence of movements for the smooth landing with the paraglider becomes known and the corresponding pattern that you must follow to complete it.

After the end of the theoretical training, the practical part begins. This in turn consists of 3 subcategories.

Ground training: Initially a first contact is made with the equipment and its use. Then corresponding exercises are performed to consolidate the new knowledge. Ground training consists of about 20 hours of lessons.

Low flights: These are the first flights that take place after the instructors judge that the apprentice is ready. The low flights, from 10 to 60 meters from a small hill, are made so that the student knows the take-off and the contact with the ground on the landing. They also learns to direct their parachute in the air and brake it accordingly. Communication is done wirelessly either for simple guidance or for solving a problem. It takes an average of 6 to 10 flights (or more) until instructors decide they are ready to move on to the next and final stage of basic training.

High flights: The last step before completing the training and autonomous flight at the same time. The high flights have an altitude difference of about 350 meters. In these the new pilot applies all the previous techniques they have learned. There is complete instruction from the trainers via radio throughout the flight, as well as on low-flying flights. The duration of high-altitude flights depends on the weather conditions, as well as on the abilities of the respective trainee. It takes about 10 flights or so for the novice pilot to learn to take off and land safely.

After completing the basic training, each pilot has a more comprehensive view of what he or she will want to do in the future with the paraglider. Many simply choose to fly for personal pleasure. However, there is also the possibility for those who want to follow the sport path of the paraglider. In this case you can deal more intensively with the sport by completing new schools and training.

The whole package of training together with the theoretical and practical part that we analyzed above, as well as the provision of the corresponding equipment, can cost approximately 700 € – 750 €.

Near Athens one can try paragliding in Platea, Anavyssos or Kandili in Megara. One can also paraglide in Delphi, Ioannina, Boeotia, Drama, Halkidiki and many Greek islands such as Lefkada, Kefalonia and Crete.